23andMe has processed my genetic information and revealed my ancient past. After fifteen years of research, I’m now able to reach farther back than our modern ethnic divisions and racial lines. Today, I discovered I’m not actually Anglo-Dutch Colonial (with a touch of Native American), British, German and Italian. I descend from a Pharaonic slave in Egypt or a Greek republican. I am probably a direct descendant of a Roman soldier from Thrace.

Scientists have divided all humans into groups based on mutations in our genetic code. These haplogroups, as they are called, come in two favors: Y-chromosome (Y-DNA) and mitochondrial DNA (MtDNA). The Y-chromosome is passed down from father to son while mitochondrial DNA, which is separate from our usual set of 23 chromosomal pairs, passes from mother to child (son or daughter). Although Y-DNA and MtDNA mutate at relatively high rates as opposed to its counterparts, genetic testing can identify where and when certain mutations occurred. It tells us where our ancestors lived thousands of years ago and how they came to be in the places we genealogists find them. Many haplogroup mutations are tens of thousands of years old. That’s where humanity’s divergent genetic stories begin.

Even as these new findings are compelling and interesting, take some of it with a grain of salt. Scientists are discovering more about our genetics every day. The haplogroup profiles I received tend to be accepted by most in the field. The interpretations I make are largely my own, given how they are presented by 23andMe. In the coming months and years, my genetic profile will become more accurate as scientists learn more about variations in our genes, their functions and their origins.

As I previously stated, I was certain my MtDNA haplogroup was U5b1, based on cousins descended through the female line from a common ancestor. I am U5b1. Haplogroup U5b1 has a large presence in Europe. The earliest common ancestor for all my family that I’ve discovered is a woman named Luigia Rossi, who lived in Castelmassa, Italy. Once I determine her parentage (her mother more specifically), I will extend the MtDNA tree farther back in time. If you are descended from a Bighinatti, Zaghini or Rossi woman from the Italian River Po area, you and I are related.

The odds that a child along this line is not her mother’s is possible but highly unlikely. I am virtually certain that Luigia Rossi is my fourth great-grandmother. I can assume that this maternal line, if it were traceable to the year 1000 CE, would have no genetic discrepancy between mother and female child. If there is any, it may be once in a millennia event, literally. Simply put, I’m going to assume that a millennia ago, perhaps many thousands of years, my mother’s mother’s mother’s etcetera etcetera, was living somewhere in Europe.

My Y-chromosome (Y-DNA) haplogroup was a complete mystery. The male progenitor of my family in America, William Tagg, has a handful of living descendants that would share his Y-chromosome. He has hundreds of descendants but only six living males carry our surname and all are closely related to me. William’s birthplace is somewhere in Britain, likely at England’s Southwest. His first record in England surfaces in 1815 at age 25, when he marries for the first time in Bristol, England. Based on some records, William’s family (namely his lone surviving child from his first marriage) has ties to the area. There were numerous Taggs in Somerset, England, particularly in and around Bath. I predicted that my Y-DNA haplogroup would be R1b simply because it has a high percentage in England. How wrong I was.

Today, I discovered my Y-DNA haplogroup is E1b1b1a2* or E-V13. What is significant about that haplogroup is where it is not prevalent, namely England. Actually, E-V13 is prominent in Africa up into Greece and the Balkans. However, there are pockets in Britain where it does exist. Be mindful, the origination of this haplogroup was 23,000 years ago, giving my ancestors plenty of time to actually get to Britain. But since E-V13 is rare in Britain, it is more likely a more recent event that brought the haplogroup to England. The answer may lie with the Romans. 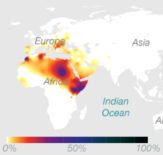 When the Romans invaded Britain 2,000 years ago, they used soldiers from Thrace and Dacia in the conquest. Those ancient places were located in the Balkans, where studies have shown this particular subgroup of Haplogroup E exists in large numbers. It could be that a Y-DNA ancestor was a soldier during the invasion. He could’ve settled in Britannia and raised a family or nefariously left his progeny in England. One thing is for certain, if families remain in an area for centuries, it is possible his descendants lived near Roman towns. Aquae Sulis was one of those towns and today it is known as Bath.

(Certainly, it is more likely than not within the 500 or so years of genealogical history, the biological father of one of my ancestors is not recognized, thus creating false-paternity. Nevertheless, it is likely such an individual was in a locality near the Taggs in England, allowing the Roman invasion to remain a viable theory.)

As someone who is fascinated by Roman history, the idea that an ancestor of mine was involved in the Conquest of Britain is a mouth-watering prospect. It is conjecture of course, but as far as I’m concerned, I’m the descendant of Thracian warriors, who carry the blood of Greek and Macedonian kings before them. It’s fun to dream anyway.

(I have done only preliminary research. Based on that, I have determined this subgroup also to be known as E-V13. If anyone can properly verify this, I would be grateful.)

This is where the genetic journey becomes increasingly astrological in my opinion. Since the genetic sample is small, the ability to discern prehistoric roots would be small as well. 23andMe claims it can calculate how much DNA is Neanderthal. For those that aren’t sure, Neanderthals were, in fact, a different primate species from Homo Sapiens. We are closely related and so we were able to procreate. A small percentage of Neanderthal DNA has survived thousands of generations and is present in millions of present-day humans.

My first cousin told me her neanderthal percentage, as calculated by 23andMe, is 3 percent. Mine is 2.9 percent. It is impossible to tell for certain if our common maternal lines contributed similar amounts. Genetics is about chance. It is likely that we just happen to have the same amount of Neanderthal in our genes. Apparently, this is a high percentage compared to 23andMe’s database. In any case, I am largely of European stock. My cousin is as well. Having a large Neanderthal percentage, if verified by further testing, would be expected for both of us.